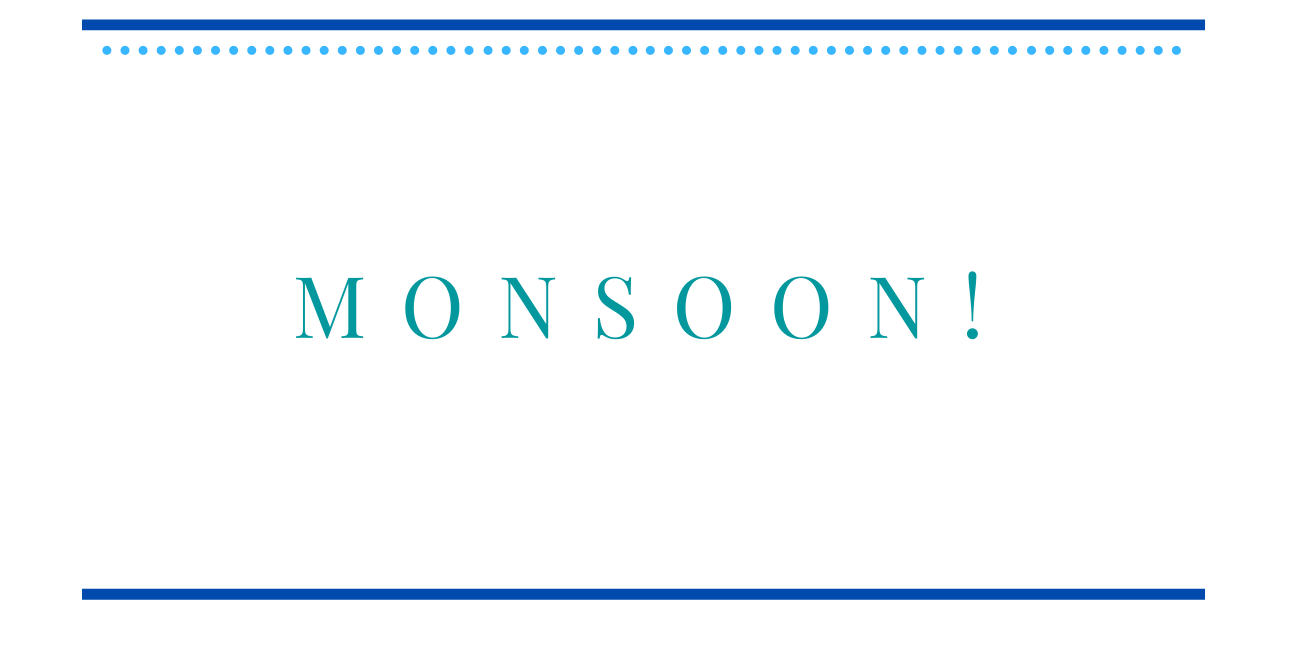 Monsoon in the desert….. what’s the big deal?

Monsoon – sometimes it feels like the desert is defined by this word.  Do you wonder why?  Well I did when we first got here.  Coming from the heart of the midwest, we had rain and storms all the time so we were skeptical that this was going to impress us in any way – I mean, c’mon, we had tornadoes!  What can compare to those?  When we moved here almost 7 years ago, we came at the end of monsoon so it was an entire year of anticipation before we got to really experience monsoon.  And it is an experience for sure!  But it took a different viewpoint to feel that way. 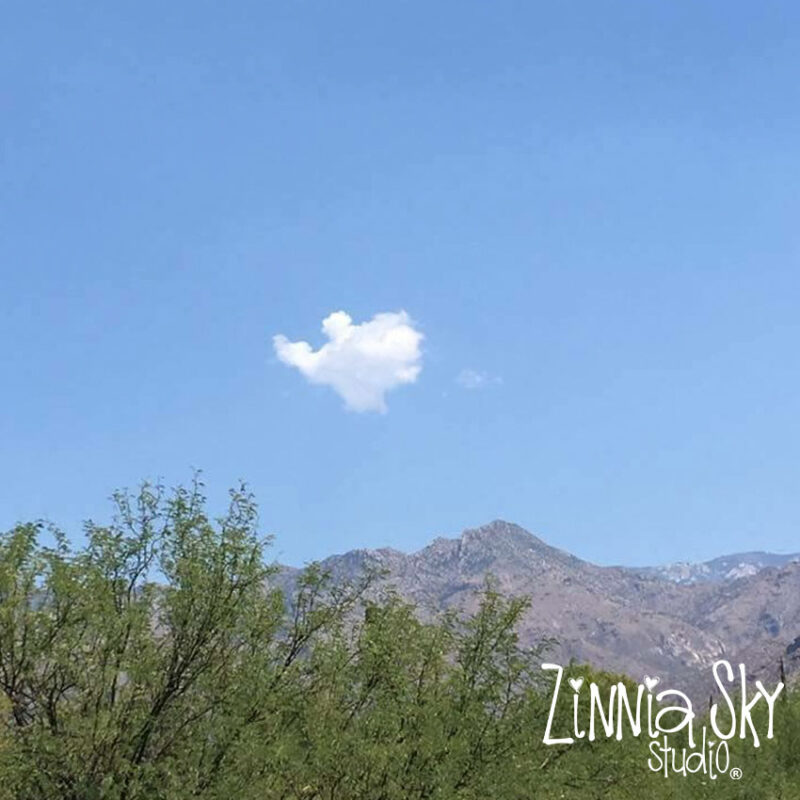 It all starts with the first cloud sighting….

What exactly is monsoon?

That’s what I wanted to know.  I already knew it meant it might rain – but why?  Since monsoon is such a big deal in Arizona, there’s a LOT of education about it. The first thing I learned is that monsoon actually means a seasonal shift in the wind.  Most of the year, our wind and weather comes from the north and west – California and Nevada – but as summer starts moving in, everything shifts and comes from the Pacific Ocean and Gulf of Mexico.  As you can expect, now moist air is blowing into the super hot desert and voila! rain and thunderstorms.  I know it’s not really that simple, but then again, it is.  If you’d like to know more since I simplified it, CLICK HERE to see what Arizona State University has to say.

It rains, so what?

In Illinois, all our weather came from the west – unless it came from the east and then watch out!  You could watch rainstorms slide off the mountains in Colorado and build as they moved across the plains.  You could see it move eastward on the radar.  You could almost predict exactly when the first rain drops would fall.  It would come in a line and scoot across the fields.  You could watch the thunderheads stretch straight up until they looked like they were reaching miles into the sky.  You could see the rain hanging in the bellies of the clouds as they got darker and lower.  You could watch the lightning dance across the sky for hours sometimes before the storm got to you.  So in other words, the rain was pretty predictable.  But monsoon is not like that.  Not even a little.

Living all my life in the midwest, storms were regular occurrences all year round.  We had snow thunder, blizzards, thunderstorms, rainstorms, fog, tornadoes, and sleet.  Pretty much if weather could produce it, Illinois had it.  So when the first rain fell on us here in Arizona, we were like, really, that’s it?  What’s the big deal about this?  And then I got caught driving in a monsoon storm and my perspective changed instantly.

It’s just some water on the road, yea sure.

You can be staring at an empty radar screen looking for the rain as it proceeds to dump buckets of water on your head.  The only warning you got for this was now you’re wet.  And then the blob pops up on the radar.  We’ve all lived in places that flood, right?  We’ve been taught not to drive in running or standing water. But here in Arizona, when it rains there is water everywhere.  Like the entire world becomes a giant puddle.  So if you’re driving, you’re in running or standing water.

My first time out in a monsoon storm took me totally by surprise.  It was sunny, then it was pouring buckets.  And immediately water covered the roads.  There were no ditches.  There were no culverts.  The water was not diverted from the roadway.  The roads were not crowned or sloped.  And there were dips every 20 feet or so.  I had no idea what to do other than figure it out.  Thankfully I was in a 4-wheel drive Jeep so I just did what everyone else did – drove through it until it became questionable.  Questionable was actually just a pause until someone braver than us blasted through the water and showed what we were facing.  I made it home that day without incident but I learned a lot from that one trip.

Monsoon doesn’t just cool things down a bit and give us really great photo opportunities, it’s dangerous!  Lightning can spark ravaging wildfires that change landscapes and habitats. Microbursts can become raging floods that happen without warning.  But the desert soaks up all that water and stores it for the dry times.  It doesn’t care about our inconvenience.  And for a while after the rain, you can feel the desert take a deep breath of the creosote infused air and pause. 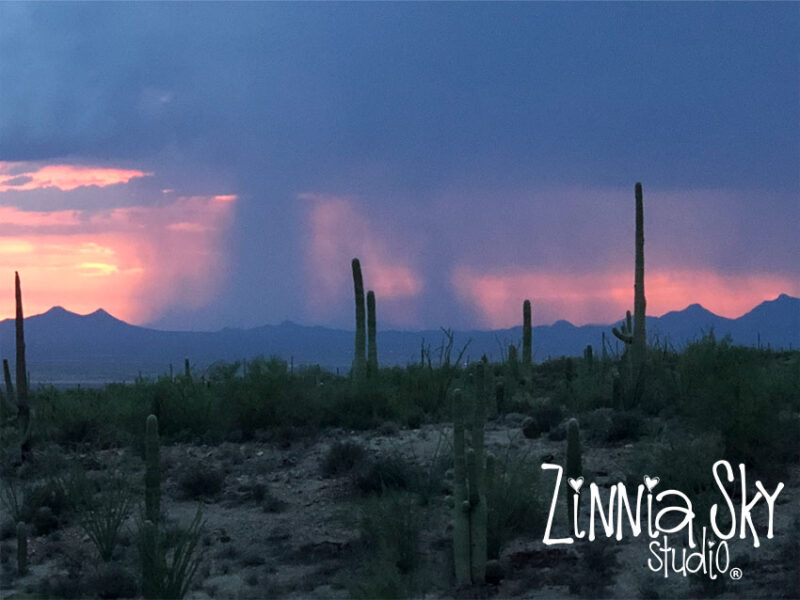 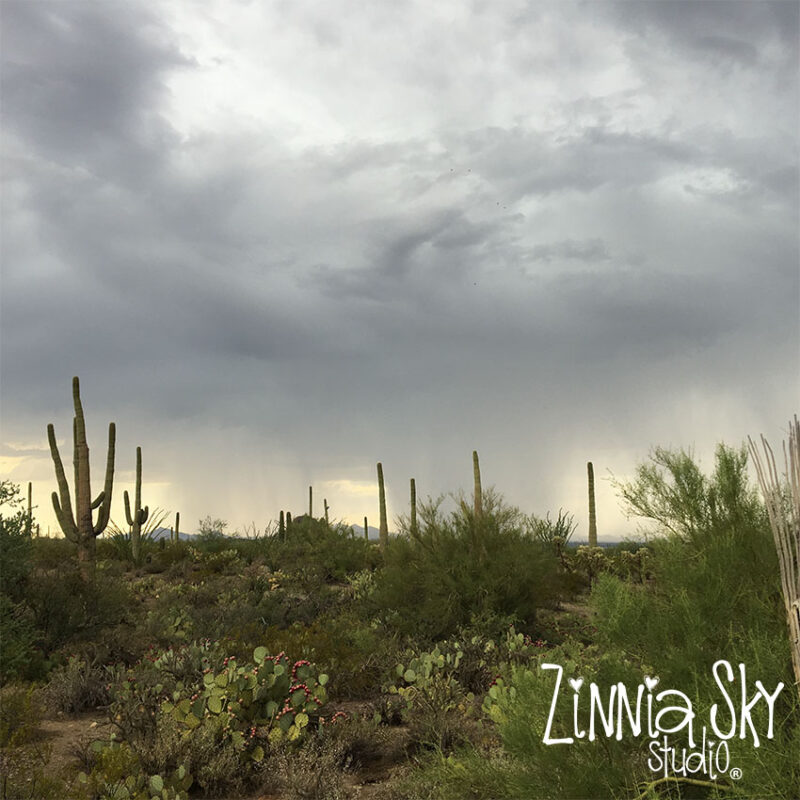 How the monsoon looks from my point of view.

A few years ago I was incredibly inspired by the monsoon.  It was a particularly active season and I couldn’t get enough photos of the rain columns despite filling my phone up with a bunch of pictures that all looked the same!  But that inspiration produced my interpretation of the tiny quail in the rain.  I watched those quail in my yard going about their business like nothing was going on so I imagined them in rain boots with umbrellas stomping through puddles in great delight. 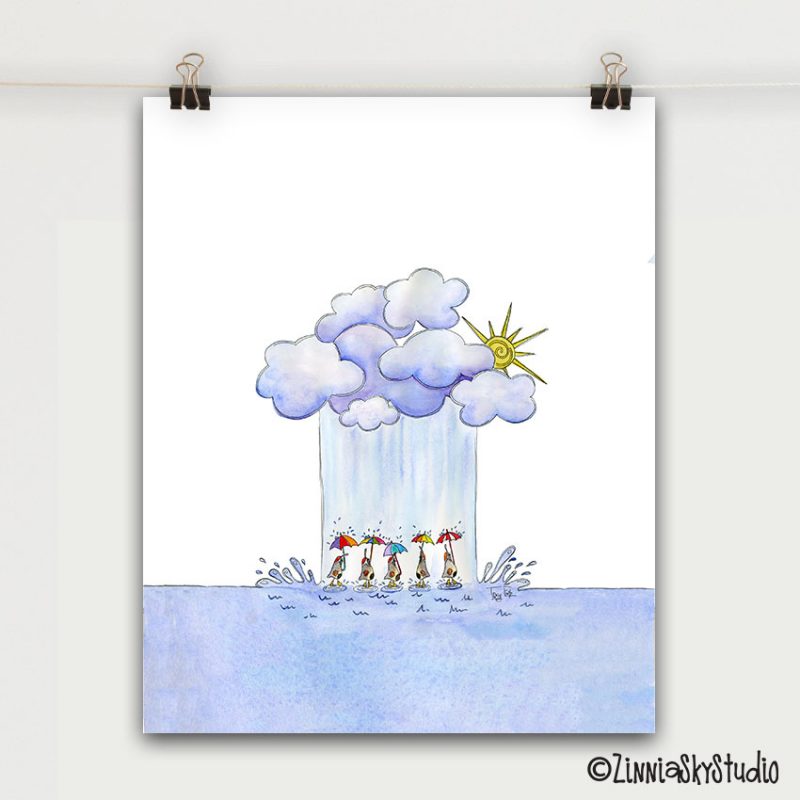 I’m sorry life is raining on your parade… so I’m sending you a hug until the sun shines on you again!