Road Trip Across the Country 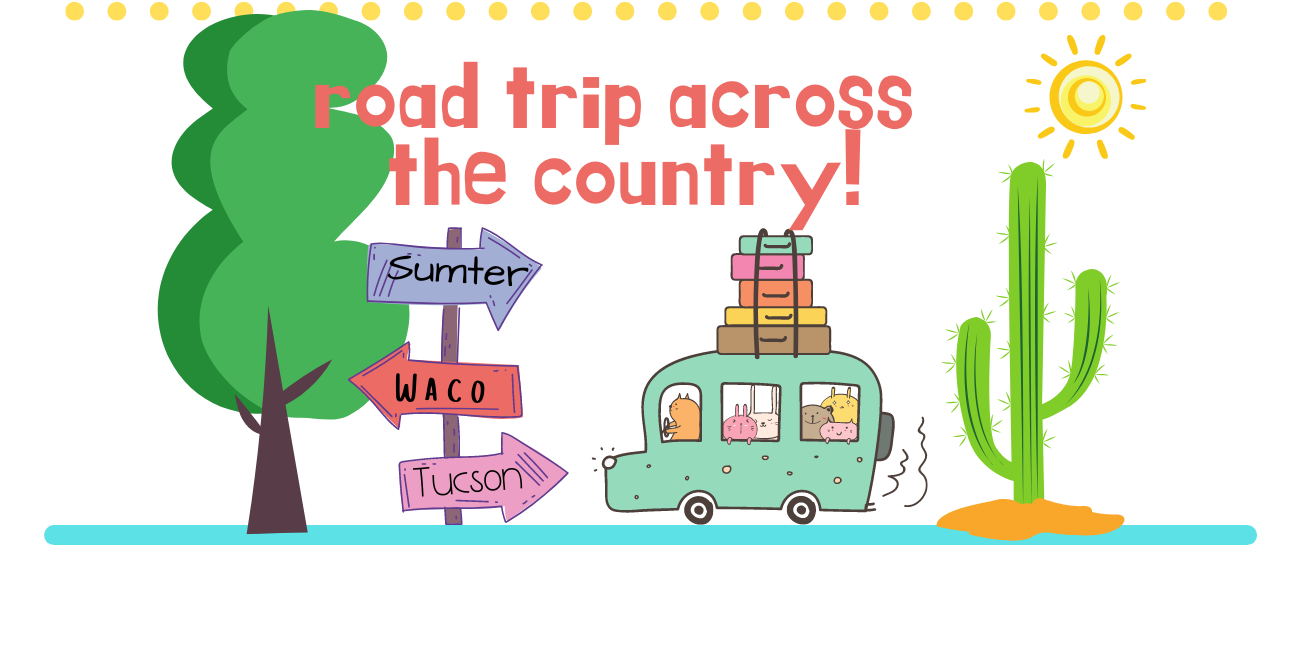 Road Trip Across the Country

Summer is traveling season.  To be honest, I’m not a great traveler.  I never traveled as a kid.  I didn’t really travel until my kids were grown and then not a lot. I’m a homebody and not ashamed to admit it.  Home is my very favorite place.  But some of my very favorite people invited me to travel with them this summer and there was no way I could say no!

We’re a long distance family so travel is part of life.  Before last year, we were getting into some good routines – my oldest son Nathan and daughter-in-law Lori from Canada would visit during our coldest days of the year, for obvious reasons.  My oldest daughter Rachel in Germany would visit during her spring break and include us all in her stops.  And we were fortunate to have my youngest daughter Jorie & son-in-law Dennis close by in Phoenix and my youngest son Zach, daughter-in-law Renee and the three grandkids here in Tucson.

Zach is Air Force Reserves and Renee is active Air Force so we knew they’d be moving on soon and those orders came this spring.  Their new home would be in South Carolina.  Thankfully still in the States but more than 2000 miles away.  As the plans came together and included a long drive, they invited me to come along and I considered it a trip of a lifetime.  So, I packed my suitcase, cleared my calendar and jumped in the van!  I was going on a road trip across the country!

How many days on the road?

Our caravan consisted of a pickup truck with Zach, their beautiful Golden Retriever Koda filled with important things pulling a trailer filled with even more important things and a minivan with Renee, Wyatt, Carter, Eli and me.  With so many things in consideration, Zach planned each day with the boys’ tolerance in mind and it executed perfectly!  The first day we went from Tucson to El Paso ending with a picnic at the hotel.  The second day we made it almost all the way across Texas to Waco.

You know what’s in Waco right???  Yep, Magnolia of Fixer Upper fame.  And it did not disappoint.  After wandering around The Silos for a while, we picked up some BBQ for lunch and had a picnic in a beautiful park along the river.  Next stop – Jackson MS for our last night on the road.  We left Jackson just as the sun was rising over the city for the last leg of the trip.  We were on the road for four days – two short and two long.  We made lots of stops along the way that included picnics and places for the kids to run.

Traveling across Arizona and Texas, Eli had his eye out for dust devils.  But as we left Texas behind and the trees got taller, he was soon seeing water everywhere!  Living in the desert, he hadn’t seen water just hanging out in river beds and ditches and random ponds so this was pretty exciting for him.  The boys were especially excited to see grass and tall trees.  The further east we went, the taller the trees got until they towered so high above that we could barely see the tops.

After our road trip across the country, we made it to Sumter, South Carolina!

And we made it!  Four days and three nights on our road trip across the country!  The boys were excellent.  It’s a lot to ask three young boys to sit in a van for four days.  Especially with all the excitement of a new home at the end of the trip.  But they did it and they did it well.  And I got to be there when they ran into their new home for the first time.  A home where they all got their own room.  With a pond in the back yard.  A place with grass and trees, lightning bugs and toads and all kinds of new things to discover.

Yes, they’re now more than 2,000 miles away and I miss them all the time.  But we’ve had FaceTime calls with so many more to come.  I love hearing about the new things they’re doing and seeing how excited they are about their new home.  Soon they’ll be going to school and making new friends and we’ll have so many more things to talk about.

And just like that, I’m now a long distance grandma.  I know that many of you are already long distance grandparents, families and grandkids.  I’d love to hear all the things you do to not just stay connected, but to keep that bond strong across the miles.  I’ve got some ideas but I bet you have some better ones!  I know that sending cards is a must.  Even though we have FaceTime and I love it, I remember seeing my grandpa’s handwriting on the envelope in the mailbox and being excited and curious to see what he wrote to me.  I want to create those kinds of memories too.  Some of the first cards I plan to send are from the Miss You More set and the Friend Pack Card Set.

Comment with how you stay connected.  What are your favorite FaceTime games, best kinds of cards to send, goodie boxes?  I want to hear them all.