A House Full of Chihuahuas – how did that happen? 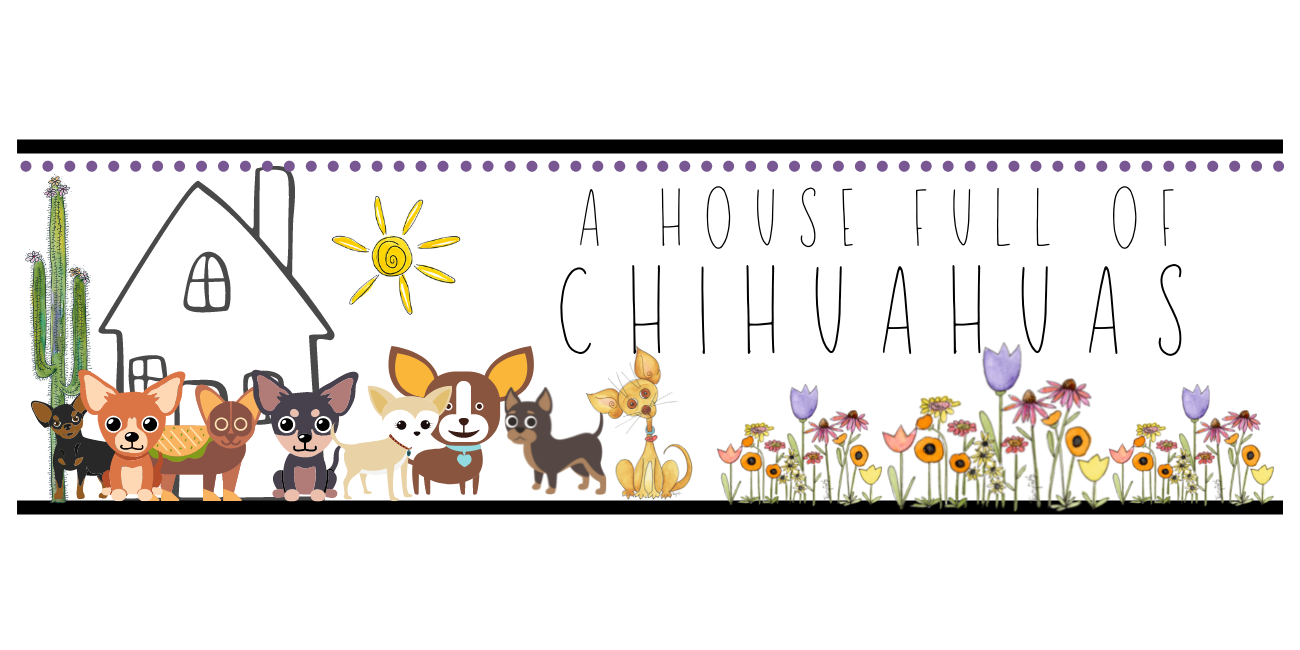 A House Full of Chihuahuas

As you can imagine, a house full of chihuahuas is quite interesting.  And you might wonder why and how we ended up with so many.  We didn’t set out to fill our house with chihuahuas.  Or dogs for that matter.  But it happened.  And despite some of the challenges, we love it!  Yes, they bark a lot.  They know the sound of the mail truck, UPS and FedEx and notify us immediately when they enter the neighborhood.  But when these tiny little bodies cuddle up against you, well, who can hear all that noise?

It all started with raising a house full of kids.  I bet you can imagine the years of chaos that went along with that.  And as they started to leave and the house got quiet, we jokingly replaced each kid with a new dog.  Sometimes the dog was called the kid’s name and sometimes when the kid returned, they got called the dog’s name.  Seriously.  It happened.  A lot.

First, a house full of kids and dogs.

When Tim and I started our lives together, he and his well-behaved Doberman came into my house of tweens and teens, dogs and cats.  Now there were four kids and three dogs – a crazy black lab named Bubba, Diablo the Doberman and a miniature poodle named Noelle – and an assortment of inside and outside cats all under a single roof.  Yep, it was as crazy as you can imagine.  We lost Bubba to a fast and unknown illness that shocked us all and we needed to replace that huge personality in a smaller package.  What better choice than Lucy the Jack Russell, right?

Evidently Jack Russells have their own quirkiness that I didn’t understand so I rescued a second one I named Lainie hoping the two would straighten each other out.  Nope.  Then one of the kids found the most amazing miniature pinscher on the streets of another small town and brought him home.  I tracked down his owner who said he didn’t want him and we could have him.  His name was Spaz which fit him perfectly.  Now there were five dogs.  But age soon took Diablo and Noelle and the house felt sad.  So I got my first chihuahua.

I carefully searched for my perfect chihuahua.  I wanted a tiny, tri-colored one.  But in Illinois, they weren’t that plentiful and I only found one.  As I walked out the door to go see him, Tim said – if he’s not tiny, don’t get him.  As soon as I laid eyes on this tiny 5 pound, 8-week old tri-colored puppy, I was in love.  He sure looked tiny to me at 5 pounds but evidently, 5 pounds was the final weight I was supposed to be aiming for.  Mr. Bean tops out at 16 pounds now.  He’s not overweight, he’s large-framed.

By now, the kids were all out of school doing their own things and we were down to just four dogs.  Then at breakfast with friends one beautiful Saturday morning, someone mentioned a couple of chihuahuas needing a home because their owners no longer wanted them.  That person and I agreed to each take one.  He went to get them but weirdly only came back with one that he claimed was the one I agreed to take.  Funny how that happened but I felt like the lucky one.  This totally unsocialized chi looked exactly like a tiny version of Mr. Bean.  We named him Tucson before we ever knew this was where we’d live.  And now there were two chihuahuas in the house.

The move to Tucson.

During all this time we had lost Lucy to liver disease and gained a small parrot we named Ricky.  So when it came time to move across the country from Illinois to Arizona, we loaded up Lainie, Spaz, Mr. Bean, Tucson and Ricky for the long three day drive to the desert.  In two big UHaul trucks each pulling trailers.  In early September.  Three of the most stressful days of my life!  But we made it without incident.

Soon after our desert arrival, we went to visit Tim’s family (3 of the 4 people we knew here) and they introduced us to their next door neighbors.  They had a few dogs, one of which was a tiny yellow chihuahua they no longer wanted.  This little dog came over to me, sat in my lap, looked into my eyes and whined.  I said we had just dragged our four dogs to the desert and I didn’t think we should upset their lives right now by bringing in another dog so soon.  But that whine stayed with me and we went back for him just a few days later.  Paco was now part of the pack and is the tiny dog you look for on the calendars every year.  The chihuahua count is up to three now!

And now we’re on a roll!

When we lost our Jack Russell, we filled her spot with Lola.  She came from a local rescue and is one of the sweetest dogs of any breed that I have ever met. Everyone who meets her wants to take her home with them.  At one of my weekly markets, the vendor next to me worked with a dog rescue and had a couple puppies she bottle fed.  When one of them failed at being adopted, I was given next chance and that’s how Maizie the Chiweenie joined the pack.

We lost Spaz to lymphoma which totally devastated us all and we thought we’d let the pack dwindle down because our hearts were pretty bruised.   Then my daughter asked if I’d go back to Illinois to get Sammy her Chorkie (chihuahua/yorkie) so he could live with the chihuahuas.  Dwindling down sure didn’t last long.  Lola, Maizie and Sammy brought the count to six.

Then the pandemic hit.  The shelters were overflowing with dogs and they were asking for help finding homes for them all.  Tim said we could help with that but he got naming rights.  So Seven joined the pack and we decided we’d hit our limit.  Then a friend of a friend found a tiny wounded chihuahua on the street.  She couldn’t find his home but didn’t want to keep him and her friend said…. I know someone who collects chihuahuas.  And Ocho completed the pack at eight.

And that’s how we ended up with a house full of chihuahuas!

Since we live rurally and in the desert, our tiny dogs never go out unattended because of all the predators.  And because there are so many dogs, we count them going in and out to be sure no one gets left behind.  Until we got to about seven dogs, we had no problem figuring out who didn’t come back in.  But when we got to eight, neither of us could figure out who was missing and we’ve spent a ridiculous amount of time looking for the eighth dog, because someone always has to be difficult.

Part of the deal for me to move to the desert was that I could have all the chihuahuas I wanted.  At that time I just had the two but knew they were my favorite dog breed.  So true to his word, Tim has made our house full of chihuahuas.  They are not a dog for everyone.  And because all but one of ours are rescues, they came with a lot of issues.  The last two in particular have brought some drama with them that we had not experienced before but it’s ok.  The rule at our house is once a dog steps through our door, it has a home for life, even if they’re difficult.

If you’ve enjoyed hearing about our house full of chihuahuas, watch for more about them.  They all have a story and I’ll be sharing them with you in more detail.

If you’d like to rescue your own pack of dogs – or maybe just one, there are lots of resources out there to help you.  For Pima County, AZ, I went to PACC to adopt Seven.  I found Lainie at Adopt-a-Pet and they help find pets local to your area.  You can also find pets at your local Humane Society and animal rescues, some even very specific to breed.  Rescue pets sometimes come with challenges but once you work through them, a rescue pet is incredibly rewarding.  It’s like they know you saved their life and will be forever grateful.

Unfortunately, our furry friends come with the heartache of losing them.  I mentioned several that we lost along the way that left holes in our hearts.  If you know of someone who has lost their friend, send them your heartfelt condolences with a sympathy card for the loss of a pet.  CLICK HERE to see Pet Sympathy cards on my website.  You don’t have to say much, your thoughtfulness is what matters most and will be appreciated.