There’s this hawk in my neighborhood…. 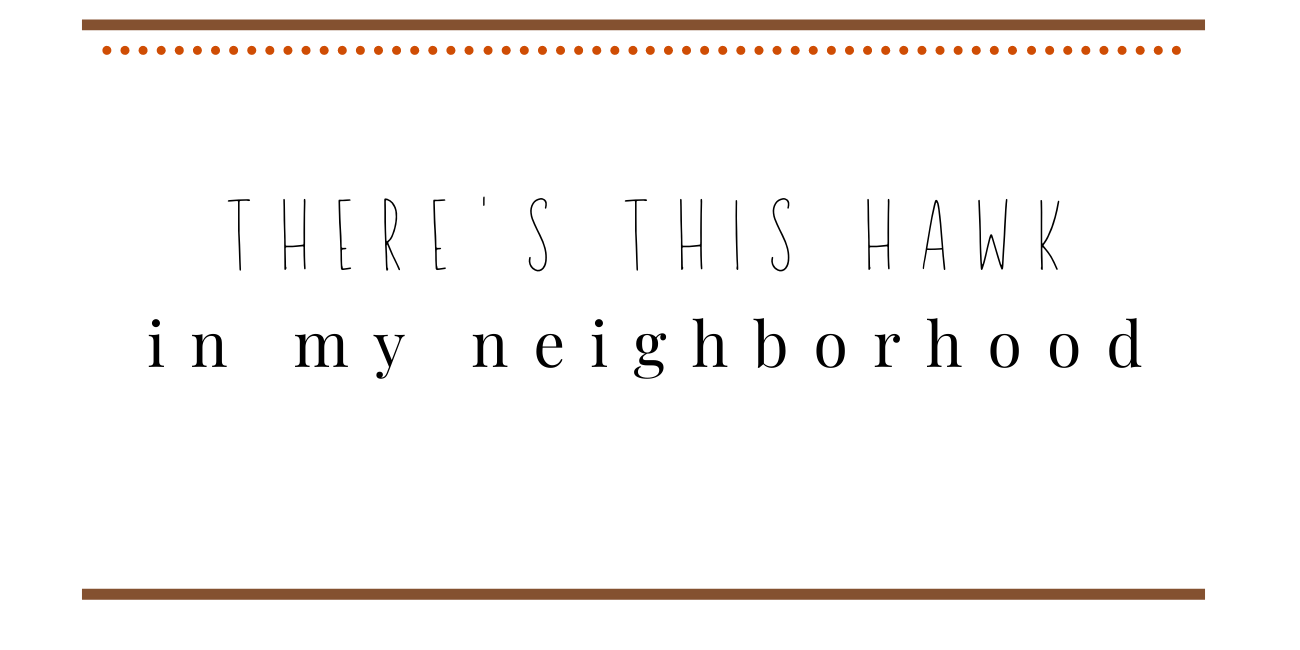 There’s this hawk in my neighborhood….. 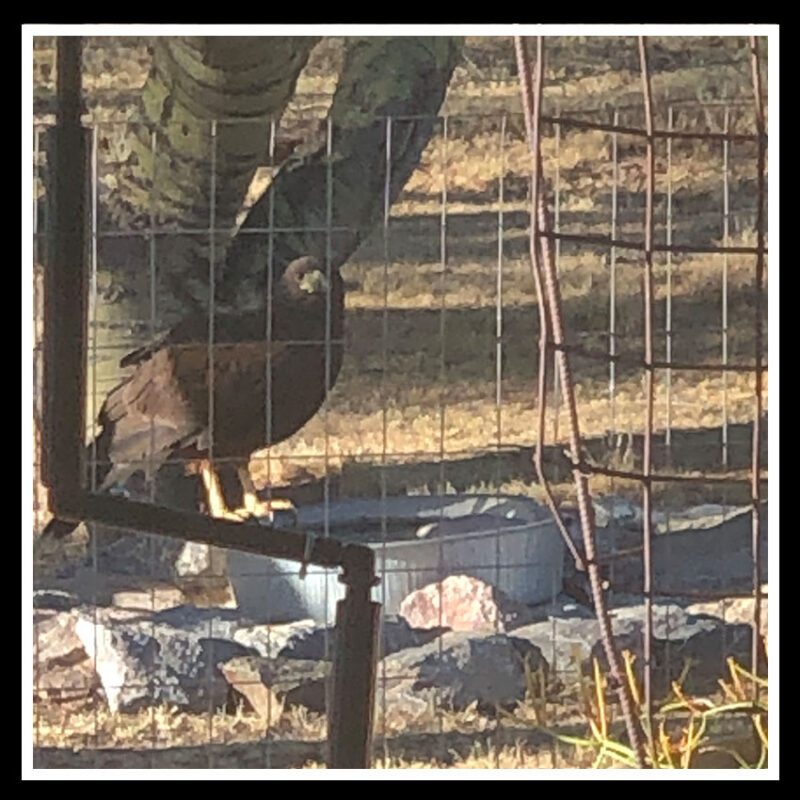 Harris’s Hawk in the water bowl.

As you may know, I love birds!  So I tend to pay attention to what’s going on at the water bowls in my yard and it’s very apparent when a raptor is near.  There’s a big whoosh of wings as all the doves and sparrows vacant the area.  Then silence followed by the big shadow passing overhead.  I imagine all the little birds scattering to the distant trees, holding very still and whispering amongst themselves while a hawk leisurely stands in their water bowls drinking its fill.

Harris’s Hawks are so very cool 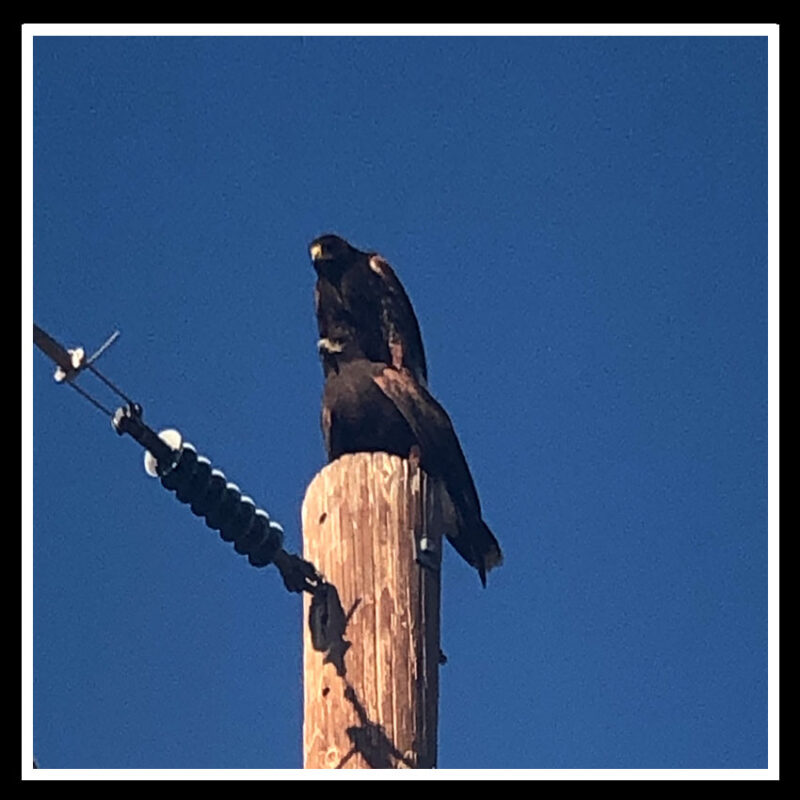 Getting a better view!

We’ve always had families of Harris’s Hawks in our neighborhood.  Their size makes them stand out, their coloring is beautiful but it was their horror movie cry that really got my attention.  They’ll perch on top of a saguaro and let out this eerie call. And then wait.  It was one of these calls that made me look up while walking one night to see these two eyeballing the neighborhood happenings.  At first you’d think this might be a mating thing, but it’s not.  I think the one on top just wanted a better view. Read more about the Harris’s Hawk HERE

Then she started hanging out at the water bowls – every day

It was very soon after seeing the two together that I noticed her coming to the water bowls.  She would show up every day at about the same time.  I know because my dogs graciously alerted me to this.  I couldn’t resist watching her – she’s probably 20″ head to tail and would stand in the water bowl as if she were cooling her feet.  She’d look all around, take a drink and then just stand there, knee deep in the water – if hawks have knees. 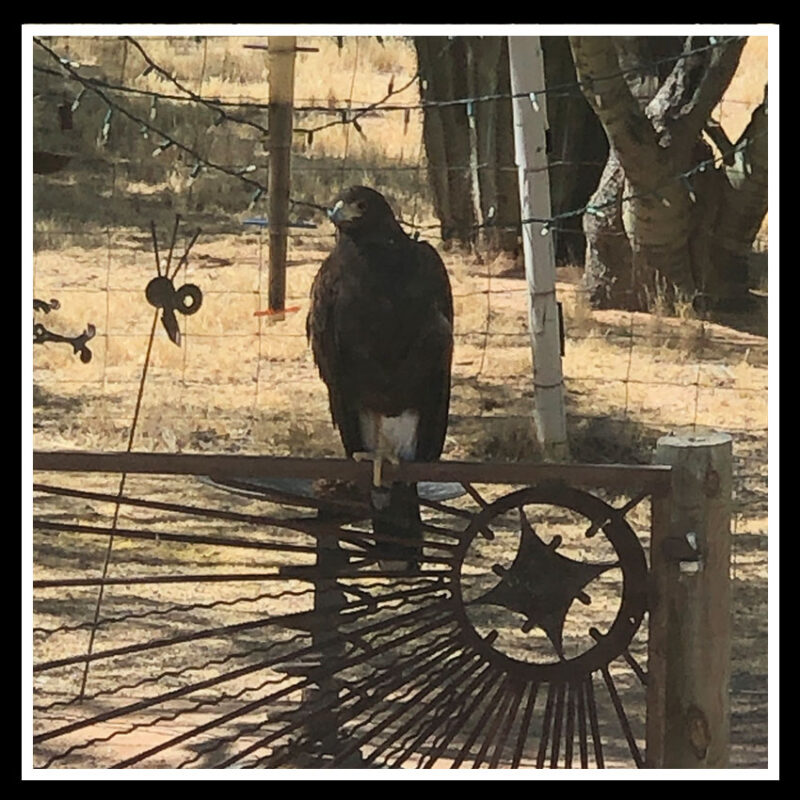 Staring back at me. 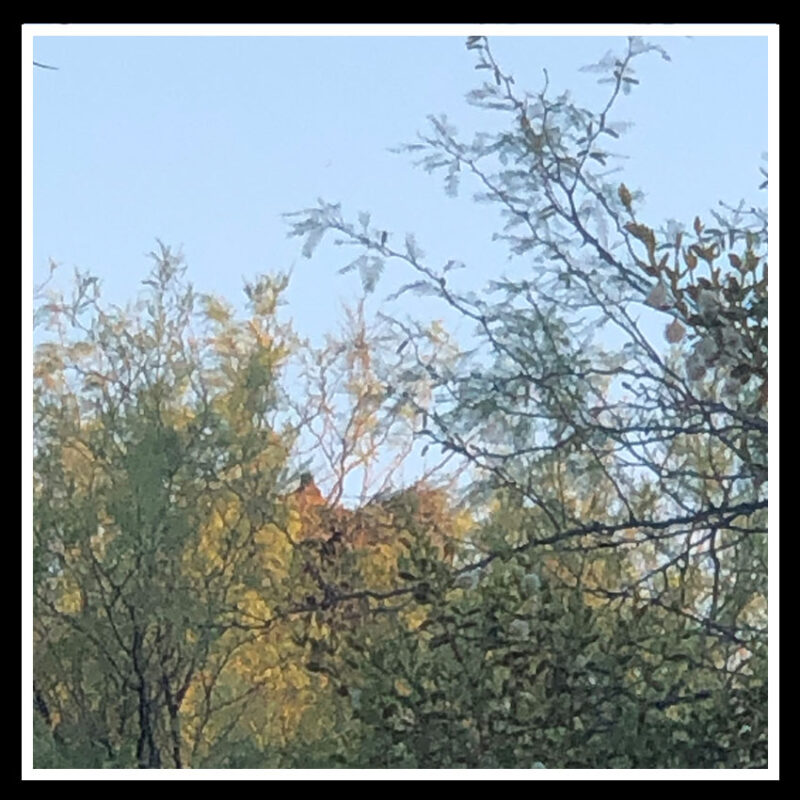 The nest – you can just make out a head watching over the edge.

Sometimes she’d take a bath and hop up on the fence post to finish cleaning her feathers.  Then she started sitting on the gate and watching me back.  Since now we’re getting to be good friends, I named her Lector – yes, from Silence of the Lambs.  You may wonder why I call this big hawk a she?  First, because she’s the bigger of the two that we see around, and second, we found their nest.  And that’s when I knew that during her time off the nest, she was coming for some spa time!

Peering at me through the trees

Eventually I started venturing outside while she was here just to see what she’d do.  Because she has hawk eyes, I’m pretty sure she sees the door knob turn so it took a few times before she would hang around to see what I planned to do.   And then it wouldn’t take long for her to gracefully take flight and disappear.  But then I noticed she wasn’t going far.  I found her peering at me through the trees.  Just watching me.  With those eyes. 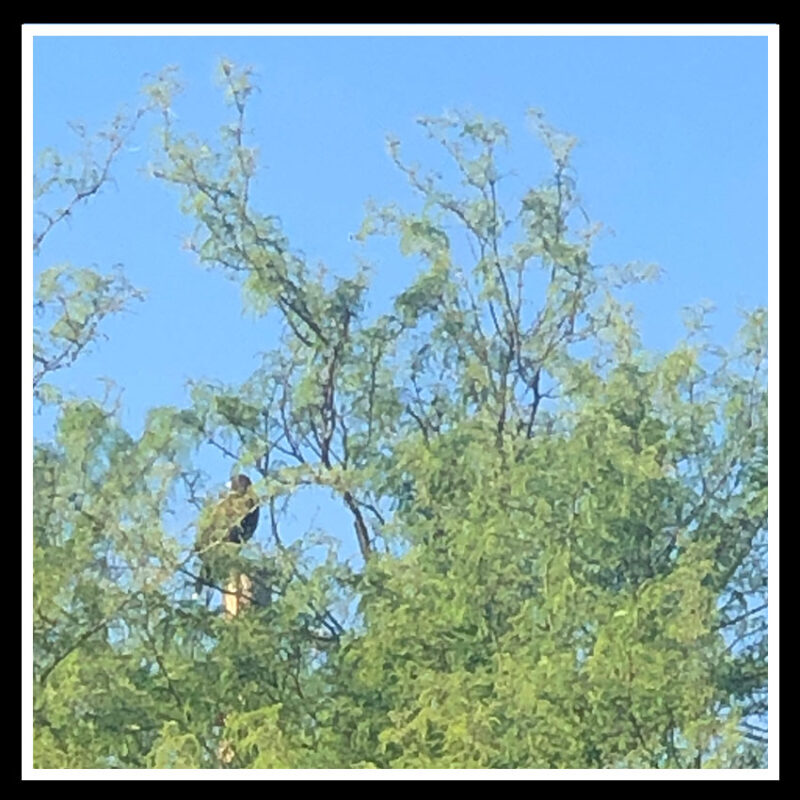 Peering at me thru the trees. 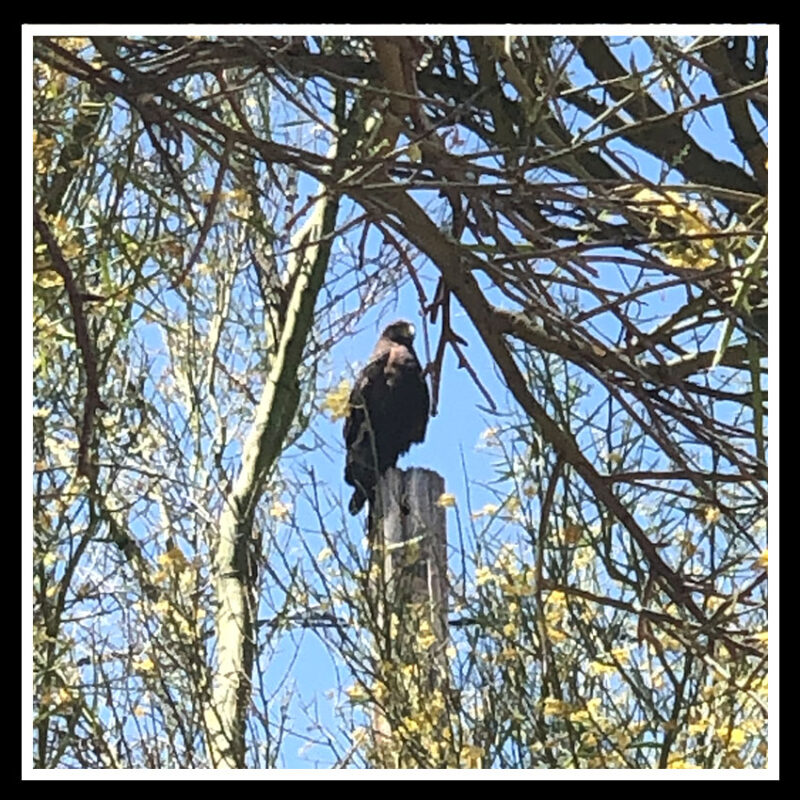 Still watching me thru the trees. 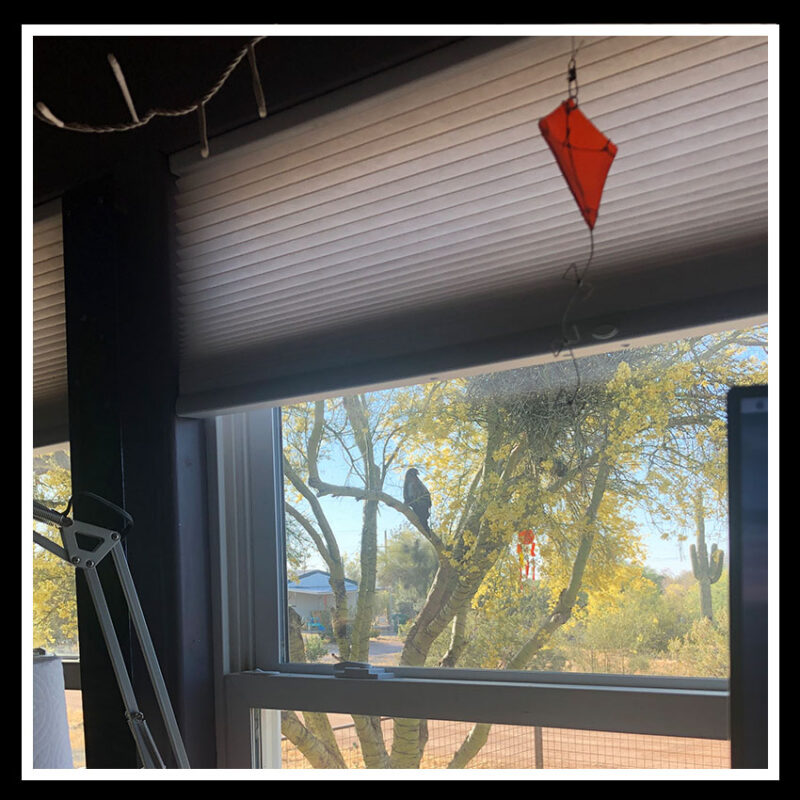 She found me in the front.

One day while I was working in my studio, on the other side of the house, I saw her land in the tree outside my windows.  She sat in that tree, staring at me for an hour.  It’s like she had hunted me down to study me.  She must have figured me out because she hasn’t done that again.

Still coming by every day

I think the fledglings have flown the nest.  We’ve been seeing a couple smaller hawks with ruffled feathers around lately just checking things out.  And the other day, the ravens were scrapping with one of them.  Can you imagine what that sounded like?  But Lector still comes every day for her spa time and lately she’s even stayed for a bit when the dogs rush out the door.  Occasionally they’ll be an explosion of feathers left in the yard for us in the morning but that might be the owls doing that.  Despite that sadness, I love that we have all these birds hanging around for me to be distracted by.