Part 3 – and now the idea becomes a card! 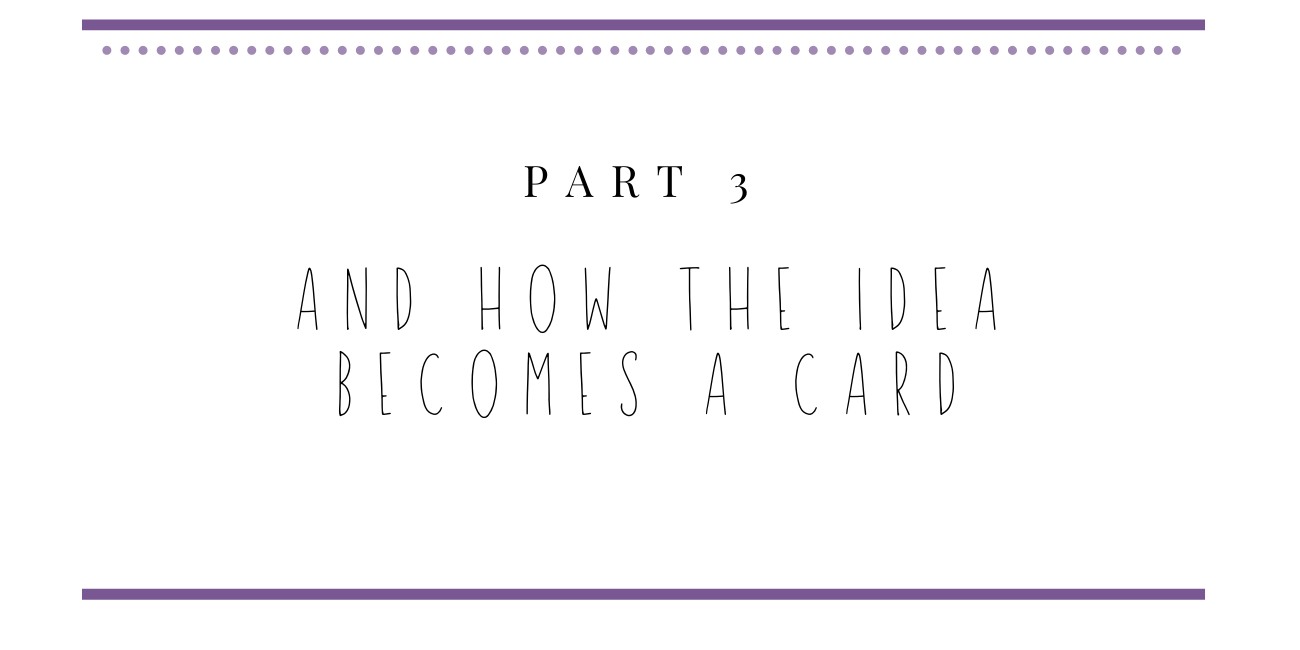 Just an FYI – if you haven’t read Part 1 & Part 2 yet, you might want to go back and read them first.

The journey of the idea…

Before I wrote this blog I wrote about the journey of how the ideas are gathered from all sorts of places, how they go onto the list and sit there until they’re ready and then how they come to life.  But in many ways, that’s just the beginning for the card.  Becoming a card and being a card turn out to be two different things.  Becoming a card is all about art.  Art is what makes the card.  It’s the basis for what it will convey.  And it’s what makes it perfect for the occasion.  Sometimes the art makes the idea and sometimes the idea makes the art.  That sounds artsy doesn’t it?

Now that the idea has gone through all its phases and has become a painting, it has to become a printable image.  So how does that happen?  Well, it needs to be a good clean image of the painting.  This I have found, can be the most difficult, aggravating thing in the world.  At least for me.  Depending on the size of the painting, the most logical way to get an image is to take a picture of it – right?  Right.  Did you know that you can’t just lean it up against the wall and point your phone at it?  Unless you’re really good at that, which I’m not.  To get a picture without distortion, the camera has to be at the exact same angle as the painting.  Unfortunately, the camera and the painting don’t come with angles on them so it becomes a guessing game.

And then there’s the lighting.  Well I suppose lighting isn’t actually the problem, it’s the shadows!  It’s like you need 23 lights just to chase away all those shadows.  I don’t know if you’re aware of this but, when you put water on paper, the paper tends to wrinkle and wave.  And wrinkles and waves create those pesky shadows.  So the paper has to be flattened.  I’ve found two effective ways to flatten my paper and both of them will probably shock you. The first way I found is to soak the back of the paper and squeeze it between two boards to sit overnight.  It’s amazingly flat by morning.  But sometimes I don’t plan well and overnight doesn’t work.  So I iron them.  True story.   But…. once I get all that accomplished and a picture snapped, ta da!  An image.

Now that I have an image and applied my graphic designer skills, it’s off to the printer!  In the beginning I thought I’d print them myself.  Seems easy enough – you put paper in the printer, tell the printer to print and it comes out as a card.  I was wrong.  Very.  Most normal printers choke on the heavier paper and after they cough it out, they pout.  Oh, and did you know they have to be cut to size and scored in the middle so they fold in half? I have no patience for this and cards aren’t any good on regular paper so I had to find a professional printer.

Because I had been doing calendars for a while and worked with printers in my previous career, I kinda knew what I was looking for.  And more than the printing of my cards, I wanted someone who would become a true business partner just in case this whole gig worked out.  And I got lucky.  The local art store gave me the names of two printers in town they thought would work well.  I went to the first one and no further.  Betts Printing has worked with me from my very beginning here in Tucson and I’m pretty sure without them, I wouldn’t be where I am now.

Now it goes into the sleeve.

Ah, the sleeve.  The sleeves are the best because of the protection they give the cards, especially when we humans want to touch them as we love to do!  So who does that?  Over the last few years, I have done way more than my share of putting cards into sleeves.  For a while, my daughter tried to out sleeve me and she did my sleeving but last year I discovered Beacon Group and they are now in charge of that immeasurable task.  You can read about them HERE.

Finding a place in the warehouse.

The idea has become an image, been printed, paired with an envelope and dressed up in a sleeve.  Now it comes back to Zinnia Sky Studio to hang out until you see it.  Have you ever wondered how to warehouse cards?  I sure didn’t know how to do it in the beginning.  I first put them in shoeboxes stacked on top of each other on a shelf.  When I outgrew those, I went to the Container Store and got some CD boxes and soon outgrew those too.  Now we have an entire room in our house that we call, wait for it… The Warehouse.  And it’s full of cards in actual bins on shelves and organized!

How it gets to you.

How the card gets to you is the fun part of this whole thing!  As much as I love being in my studio and getting to bring those ideas to life, it would be nothing if I couldn’t come out and see YOU!  The first events I did were many different farmers markets around the Tucson area.  One of the first was the Green Valley Farmers Market in yes, 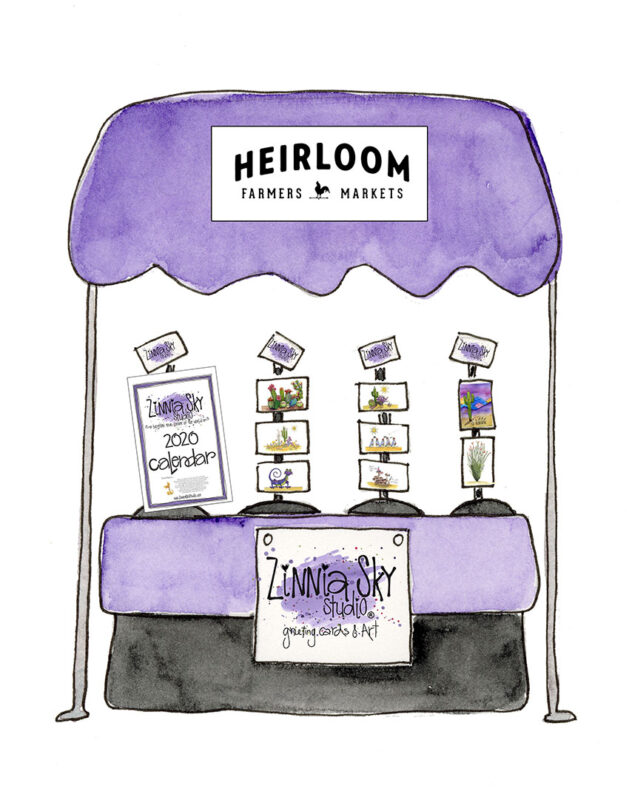 Green Valley and that is ultimately where I’ve stayed.  But I’ve tried markets on every day of the week, from one side of Tucson to the other and back again and met a zillion people while doing it.

Once I felt I was ready, I started doing shows, beginning with very small ones in churches and schools working my way up to the Fourth Avenue Street Fair and many others.  It has been and still is quite a journey.  I get to meet all of you and see lots of new faces every time I’m out.  I get to talk all day long without getting in trouble – what a great perk of the job!  And the best part?  It’s the smiles and the laughter when you see my art.

But there are times I can’t be out at the market or shows.  The season here in Arizona is pretty short, the heat puts severe limitations on our outside time and there are few inside venues offered.  I’m normally at the Green Valley Market mid-September to mid-May and show season is November, December, February & March.  But I know you don’t just need cards during those few months of the year so I have this website which I continue working on to improve and make better for you.  I have an email list so you know about new things sooner AND you get at least a once a month, here’s life in the desert art world kind of things.

And then there are times that you need a card right away and can’t wait for me to ship it to you so I have cards in select retail locations.  There’s probably one near you – check them out HERE.

What you do with your card.

And now that you have your cards, what are you going to do with them?  There are so many choices but in case you don’t know how to send a greeting card, yep, I wrote about it.  READ IT HERE.

Category: NewsJune 12, 2020Leave a comment
Tags: how a card gets made